For every house is built by someone, but the builder of all things is God.–Hebrews 3:4

My grandfather built the cottage in the nineteen thirties; my great aunt and uncle later lived here and sold apples from the front yard. When the contractor husband’s parents, Joe and Clara, bought the orchard from my grandfather, Joe took classes in orcharding, pruning, and spraying from Penn State. They ran it for several years, but eventually they divided the property into three parcels and sold the orchard acreage. It’s been sold twice since then, and the fruit trees that remain are broken down and unproductive. We wanted to make sure Apple Hill Road lived up to its name, so that first spring after we acquired Apple Hill Cottage, we planted a few fruit trees.

Joe named the road and made the sign, and now it is even listed on Google Maps…

For a time the old orchard property (which still has a greenhouse and a barn) was being rented by a local couple who were trying to make a go of a small nursery. So we drove the tractor over one sunny May morning and purchased two apple trees — a Honey Crisp and an Ida Red — and two pear trees — a Bartlett and a Luscious. Each year we’ve tried to plant at least two more fruit trees or berry bushes: we now have sixteen fruit trees, a dozen berry bushes, two grape vines, and an English walnut tree–all in varying degrees of fruitfulness.

The walnut tree was a total surprise. One bright October afternoon the contractor husband came into the house holding six or seven brown English walnuts — the kind you buy in the stores at Christmas time. “Look what I found in the yard,” he said. “There’s a lot of them.” 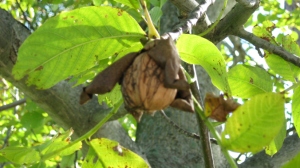 I followed him back out to the edge of the yard and we gazed up into the leaves to see hundreds of green husks just beginning to open. When the husks open, the brown shelled walnuts fall onto the ground, the road, the neighbor’s driveway…Within two weeks we had racks and racks of walnuts drying all over the house. The walnut tree is either feast or famine: we had two years of bumper crops; then two years of none. Two years ago we counted as we harvested: 993 walnuts, give or take 20. (It’s hard to remember your count when you are bending and stretching and picking up nuts from the ground…) Maple glazed walnuts in a Mason jar make lovely Christmas gifts. But last year there were none. (That was easy to count.) Bounty and scarcity, plenty and want.

The apple trees we planted five years ago are just now getting to the age where they will produce apples regularly. So far the only good producing trees are the two bent, aged trees that were here long ago, leftovers from the old orchard. We’ve pruned them back hard, but they won’t last much longer. The young trees have had a few apples here and there, but they are mostly what my grandfather used to call “little bits a nothin’.” The trees were set back several summers ago by a devastating plague of seventeen year locusts. 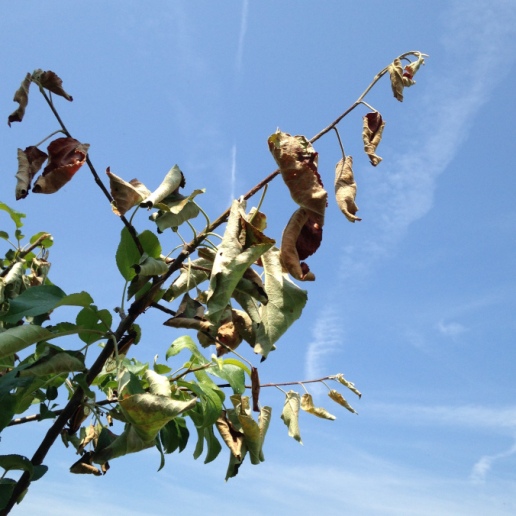 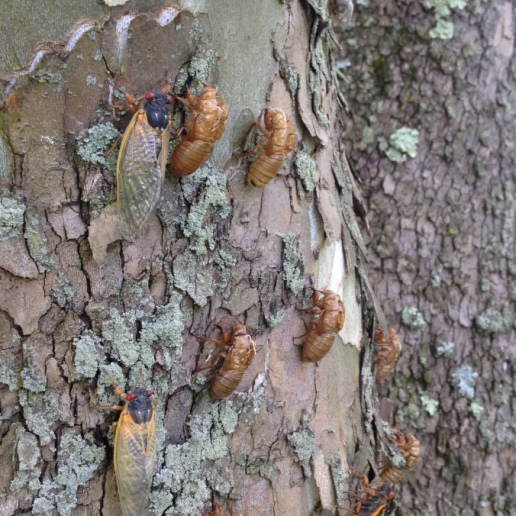 Periodical cicadas to be specific; and they decimated the young fruit trees we had nurtured. At the time it seemed to us a plague of biblical proportions, but all the trees survived, though not without damages. Then there was their recovery summer, and we were hoping last summer would be the year of the apples, but instead we had a week of 20 degree temperatures in May–and two days of snow–after all the trees had blossomed. The only fruit we had were a couple of quarts of blueberries. There are so many factors that can intervene to ruin apple crops: early blossoming, pollination failure, late frosts, too much rain, not enough rain, insects, deer… Even when there are apples on the tree, they can be lost or ruined by June drop, scab, insects, and various blights. Bounty and scarcity, plenty and want.

The two pear trees were much taller than the two apple trees we planted at the same time, so it’s likely they were a year or so older. Four summers ago we had our first real crop of pears. The Luscious tree yielded a bushel of large picture-perfect pears that we saved for eating fresh and giving away. The Bartlett tree yielded a bushel of many small pears that I canned and made into pear butter. In September, we were overrun with pears; by December the fresh ones were gone and we were left with canned ginger pears in the cupboard. Oh, they are good, but there is nothing like a juicy fresh pear. But since then? We had a summer of locusts, a summer in which only one tree produced, and the summer of frosts. Bounty and scarcity, plenty and want.

Bounty and scarcity. Plenty and want. The seasons of our lives are marked by these contradictions. At any time the loss of a job, a spouse, or health, can change our financial realities from prosperity to poverty. Here in 2020, this time of Covid-19, it’s become very obvious how prosperity can turn into poverty in just several short months. How do we live successfully through lean times? If and when good times return, can we live in compassion and generosity by remembering our own past troubles?

Paul writes of this in Philippians 4:11-12 when he says, “I am not saying this because I am in need, for I have learned to be content whatever the circumstances. I know what it is to be in need, and I know what it is to have plenty. I have learned the secret of being content in any and every situation, whether well fed or hungry, whether living in plenty or in want.”

I want that. I want his secret of being content in any and every situation. I don’t want to want fresh pears in February. I have delicious canned pears in my cupboard; why isn’t that good enough for me? During a lean month (a contractor’s life consists of always trying to maintain the right balance between lean months and months of plenty) I don’t want to worry about bills. Don’t we all want that peace of being content in every situation? What is Paul’s secret? — he tells us in verse 13 — “I can do all this through him who gives me strength.”

Put your needs, your wants, your discontents, in God’s hands, not the world’s hands. Don’t look at those fresh pears from Australia or South America in the grocery store. Prayerfully think instead, “I don’t need those; I have a cupboard full of pears; I am blessed. Thank you God for those canned pears.”

It isn’t easy, here in the land of plenty, where companies and advertisers make their living on making us want their stuff so much that we think we need it. Can’t live without it — or maybe we know we could live without it, but we can’t live well without it.

I am no mathematician, but here is my vision of that balancing act. Draw a circle and a point on the boundary of the circle. An antipodal point on a circle is directly opposite another point on that circle. Label one point Plenty; label the other point Want. Between those two points can be drawn the true diameter. Truth. God. Draw a little triangle below that line in the middle of that circle that represents the balancing that God requires of us. It also represents the center of our lives, where God needs to be. (The triangle is a nice metaphor for the Trinity—God, Spirit, Son—don’t you think? 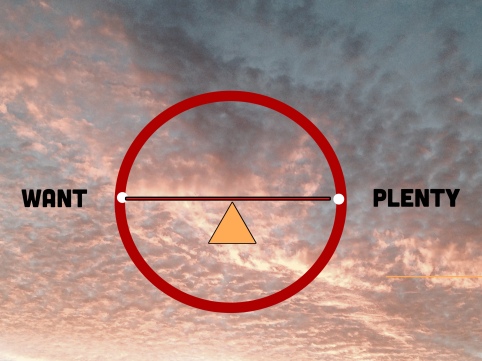 The worry about unpaid bills, or your job, or your relationship, or (fill in the blank here) is not to be in the center of the circle. Banish it to the outside point on the circle of your life and make God the center. The treasure. “For where your treasure is, there your heart will be also.” (Matthew 6:21) And Matthew gives us another verse later on that lets us know what will happen when our heart is in the center with God: “Come to me all you who are weary and burdened, and I will give you rest. Take my yoke upon you and learn from me, for I am gentle and humble in heart, and you will find rest for your souls. For my yoke is easy and my burden is light.” (Matthew 12:28-30) Jesus tells us that when He is the center, we can rest in Him. Rest from the world’s worries. Rest from your anxieties. Rest from the fear of scarcity.

The story from Luke, Chapter 21 about the widow’s offering helps to remind me of a good way to actually live out banishing the fear of scarcity to the outer point of the circle, and how to keep Jesus in the center. After watching a poor widow put two copper coins in the offering plate, Jesus says, “‘I tell you the truth,’ he said, ‘this poor widow has put in more than all the others. All these people gave their gifts out of wealth; but she out of her poverty put in all she had to live on.’” (Luke 21:3-4) Remembering this story encourages me to give extra when I am feeling poor, because I have never given all I had to live on. Even when we are feeling that there isn’t money to put in the offering plate on Sunday, remember this story and do it anyway. Can I just tell you?  So far, the bills have always gotten paid.

There’s one more practical way to help combat those worries when times are lean: remembering your blessings. It’s hard to worry about an empty cup, when you are recounting remembrances of that same cup running over. Counting your blessings, as the song says, is the way to see what the Lord has done.

“Lord, how easy it is to put faith in power and money. If I know the right people and have plenty in the bank, I’m secure–an illusion! Through the cross my great debt has been paid, and through the Resurrection my future wealth is assured. Let me rest in that daily. Lord, it is difficult for me to trust in your provision for me enough to be radically generous with my money. But if Jesus had been as grudging with his life and blood as I am with my money, then where would I be? Make me a joyful giver. Amen.” (pages 74-75)